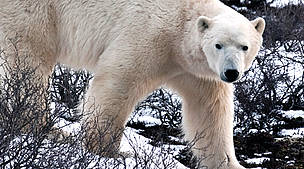 Polar bear on tundra at Churchill, Manitoba, Canada
© WWF-Canada / James Carpenter
(OTTAWA – February 11, 2013) -- New financial contributions from WWF in support of polar bear research are improving the knowledge of polar bears in Canada. Research projects are underway across the Canadian Arctic to update information about the status of polar bears in Baffin Bay/Kane Basin, and Viscount Melville Sound.

There are various reasons why a subpopulation may be targeted for surveying efforts: updated information needed for harvest management, impacts of a changing ice regime, or simply the span of time since the last survey. In the case of Viscount Melville Sound, the existing population surveys are in need of updating due to span of time since the last survey. And in Baffin Bay, management and harvest is shared between Canada and Greenland, making good, current information doubly important to ensure a sustainable harvest level.

Accurate population estimates are necessary for effective conservation of polar bears, and current population surveys are an important part of the basis for sustainable management of the populations.

“Polar bears are very important to Inuit, culturally, spiritually and economically,” said Drikus Gissing, Director of Wildlife Management for the Government of Nunavut. “Nunavut has faced some questions about our management of the bears, and so our response is to demonstrate to the world that we are managing Nunavut populations sustainably, starting with a commitment to research to ensure management decisions are made based on up-to-date reliable information on status of sub-populations.” Nunavut manages part or all of 12 out of the 13 sub-populations in Canada.

Results from the above-noted surveys will be completed and shared beginning in April 2013.

“We are proud to help support the Governments of Nunavut and Canada in ensuring the long-term sustainability of the polar bear. For a sustainable future, business, government and civil organizations like WWF have to work together. We are pleased to have made this contribution to the continued health of polar bear populations while respecting the traditional cultural rights of the Inuit hunt,” says Nicola Kettlitz, President of Coca-Cola Ltd. “Our Company is committed to continuing to support this work to maintaining a sustainable Arctic Home for both polar bears and people.”

About WWF
WWF is creating solutions to the most serious conservation challenges facing our planet, helping people and nature thrive. wwf.ca