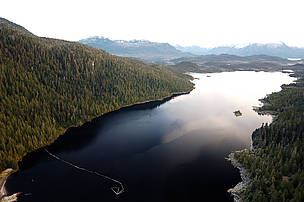 Skeena River
© (C)Mike Ambarch/WWF-Canada
TORONTO, March 21, 2014 – Today, WWF-Canada released Freshwater Health Assessment results for five new watersheds across Canada, in honour of World Water Day on March 22, 2014. These assessments, along with seven existing ones, help create a clear, consistent understanding of Canada’s national water health. This information is critical to understanding the impacts and trade-offs of resource development decisions as well as the freshwater conservation progress resulting from restoration projects and legal reforms.

Results for the twelve watersheds assessed to date range from good to data deficient. In fact, nearly half of the watersheds assessed to date have received an overall score of ‘data deficient’ due to a lack of credible information to meet WWF’s rigorous standards. This demonstrates both the need and opportunity to start building the picture of Canada’s water health through a national lens.

Quotes
“Canadians deserve to know if their water is healthy and that it is healthy – the Freshwater Health Assessment provides critical information to guide decision-making and effectively drive conservation efforts where they are most needed in our country.”
- David Miller, President and CEO, WWF-Canada

“The Freshwater Health Assessment is an important step to understanding the state of Canadian rivers at a national scale. The Assessment is an invaluable tool for management and community organizations, as well as everyone who loves rivers. It will help shape our thinking, planning and actions and help unify groups working for rivers across Canada.”
- Richard Butts, Director, Canadian Rivers Institute, University of New Brunswick

About Freshwater Health Assessment
The Freshwater Health Assessment (www.wwf.ca/waterhealth) uses four key metrics - water quality, water flow, fish, and bugs (benthic macro-invertebrates, like flies and snails) that can be applied across all Canada’s watersheds. Watersheds are assessed on a scale ranging from ‘very good’ to ‘very poor’, while watersheds without a significant distribution and duration of data to meet the assessment’s high standards are deemed ‘data deficient’. Scores are developed at the sub-watershed level, then compiled to create an overall watershed result. These assessments are helping to drive on-the-ground improvements in water health across Canada.

The results of the Freshwater Health Assessments are freely available to all, for use in decision-making, identifying where more research is needed and where on-the-ground restoration projects are necessary and will provide the greatest value. WWF aims to partly support these projects through its Loblaw Water Fund (www.wwf.ca/waterfund), which will be announcing its first round of grants in April 2014.