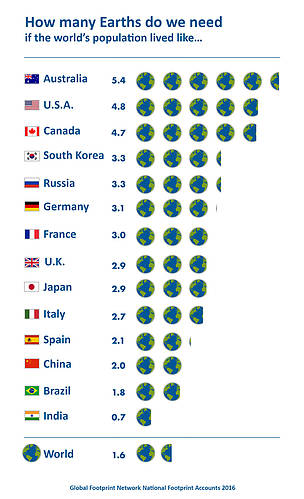 The network, a WWF partner, declared Aug. 8, 2016 as this year’s Earth Overshoot Day, which is five days earlier than last year and the earliest Overshoot day yet.

As the global population grows and consumption rises, we are emitting more carbon dioxide into the atmosphere than our oceans and forests can absorb, and we are depleting fisheries and harvesting forests more quickly than they can reproduce and regrow. To sustain our global consumption at this level would take 1.6 Earths.

When the first Earth Overshoot Day was calculated in 1987, it fell on Dec. 19. In 2000, the Earth’s renewable resources for the year were used up by late September. An ecological overshoot is possible only for a limited time before ecosystems begin to degrade and risk collapse.

How does Canada rank?
Quote from David Miller, president and CEO of WWF-Canada
“Canada is fortunate to still have an abundance of renewable natural riches, when much of the world no longer does. It’s vital that we take care of these resources now so they can continue to take care of us in the future. That’s why WWF-Canada works to build solutions to ensure people and nature thrive together. Despite the near collapse of the Newfoundland cod stocks by 1992 and the currently struggling populations of smaller fish as highlighted this week, Canada’s oceans remain among the most abundant in the world. WWF-Canada’s efforts to help the small forage fish varieties flourish again and implement sustainable fisheries are just two of the many needed solutions we are demonstrating are possible to ensure our country remains abundant.”

About Global Footprint Network
The network is a research organization that is changing how the world manages its natural resources and responds to climate change. Since 2003, it has engaged with more than 50 nations, 30 cities, and 70 global partners to deliver scientific insights that have driven high-impact policy and investment decisions. Together, they are creating a future where all of us can thrive within our planet’s limits. www.footprintnetwork.org. For further information contact Laetitia Mailhes, laetitia.mailhes@footprintnetwork.org, +1 415-794-2884.

About World Wildlife Fund Canada
WWF-Canada creates solutions to the environmental challenges that matter most for Canadians. We work in places that are unique and ecologically important, so that nature, wildlife and people thrive together. Because we are all wildlife. For further information contact Philippe Devos, director of communications and media, pdevos@wwfcanada.org, +1 416-453-0092.

How many Earth's would we need if the world's population lived like...
© Global Footprint Network National Footprint Accounts 2016 Enlarge 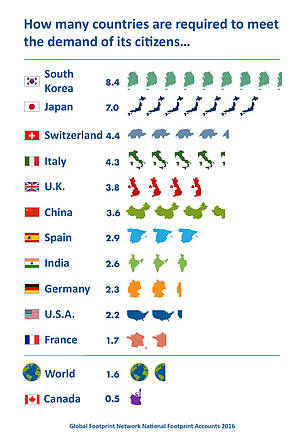 How many countries are required to meet the demands of its citizens...
© Global Footprint Network National Footprint Accounts 2016 Enlarge
Like this article?