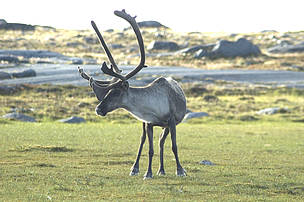 Barren-ground caribou, Northwest Territories
© Jeremy Harrison / WWF-Canada
IQALUIT, NUNAVUT, Oct. 12, 2016 – Recent statistics are painting a dire picture of the future of barren-ground caribou in Canada. Once found across the Canadian Arctic in impressive numbers, caribou herds are today in a perilous situation. Most herds are declining rapidly, some by as much as 98 per cent. This fall, WWF-Canada is highlighting the decline of the caribou and what needs to be done now to help preserve this iconic Arctic species.

While caribou populations naturally rise and fall, the current decline is particularly troubling as caribou face unprecedented threats from climate change and increased industrial development. The threats come at a time when herds are at their lowest and show no sign of recovery. Low population numbers are vulnerable to extraordinary events such as ice storms or disease, which risks wiping out remnants of herds previously numbered in the hundreds of thousands.

WWF-Canada is working with communities to advocate for the protection of caribou calving grounds. We are also calling for a moratorium on mineral exploration permits in areas that have been identified as calving grounds in Canada’s North. These are some of the ways we are working to address the threats to one of Canada’s most at-risk species and protect key habitat before it’s too late.

A troubling decline
Threats to caribou survival
To help caribou survive and thrive, WWF-Canada:
Quote from David Miller, president and CEO of WWF-Canada:
“The decline of barren-ground caribou is one of the greatest wildlife conservation concerns in Canada. With some populations down to less than five per cent of historical highs, we risk entire herds disappearing from our Arctic landscape. Not only is the loss of caribou detrimental to the health of Arctic ecosystems, it is a significant loss to our national heritage and to Indigenous communities, for which caribou play an important role in traditions and livelihoods. The caribou grace Canada’s 25-cent coins, but if we don’t act soon, there’s a risk that the only place Canadians will see caribou in abundance is on the quarter.”

“Across the Arctic we’re seeing herds suffer dramatic declines, coinciding with new threats to their habitat. Appropriate industrial development may be helpful to the economy of Northern communities, but not at the expense of caribou. WWF-Canada is working alongside communities and policymakers to balance the needs of wildlife and development to ensure sensitive areas such as calving grounds are protected so caribou have the conditions they need to recover and remain a thriving part of Canada’s Arctic.”


About World Wildlife Fund Canada
WWF-Canada creates solutions to the environmental challenges that matter most for Canadians. We work in places that are unique and ecologically important, so that nature, wildlife and people thrive together. Because we are all wildlife. For more information, visit wwf.ca