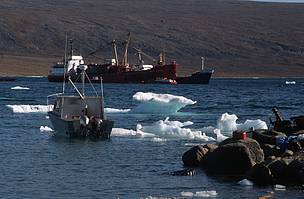 OTTAWA – The International Code for Ships Operating in Polar Waters, which takes effect Jan. 1, 2017, is a good first step, but still includes significant regulatory gaps of concern to WWF-Canada.

About the code
Better known as the Polar Code, the International Code for Ships Operating in Polar Waters was agreed upon in 2014 by the International Maritime Organization (IMO), an agency of the United Nations. It will provide a set of guidelines for ships operating in Arctic and Antarctic waters. The code is meant to protect ships and passengers as they navigate the harsh waters of the poles and protect the “unique environment and ecosystems of the polar regions,” according to the IMO.

Why the code matters
Climate change is affecting the Arctic twice as fast as anywhere else on Earth, and as a result of melting sea ice, ship traffic is only expected to increase in these ecologically rich and sensitive waters.

What the code lacks
These key protections are absent from the portions of the Polar Code that apply to Arctic waters:

David Miller, president and CEO of WWF-Canada, says:
“The Polar Code is an opportunity to protect the Arctic ecosystem from the consequences of oil spills and increased shipping. It is disappointing that these protections were not achieved. We urge Transport Canada to lead by example, and fill in the regulatory gaps around heavy fuel oil use, grey water discharge and increased consultations with the coastal communities that will bear the brunt of the impact if the worst happens.”