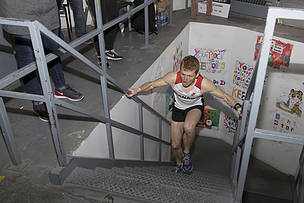 Click here for video highlights from this year’s CN Tower Climb for Nature.

Shaun Stephens-Whale, 27, set a new WWF-Canada climb record of 9 minutes and 54.9 seconds. He’s from Robert’s Creek, B.C., and has raced up some of the tallest buildings in the world, including the Empire State Building, Seattle’s Rainier Tower and Abu Dhabi's Etihad Tower and the Eiffel Tower. This was his first time climbing the CN Tower.

The fastest female climber of the weekend is 12-year-old Aysia Maurice from Bolton, Ont., who finished in 12 minutes and 53.4 seconds. A Grade 7 student and competitive mid-distance runner, she also holds the all-time Ontario record for her age group in the 1,200 and 2,000 metre events.

More than 9,000 people stepped up for nature this year and joined the climb. Together, climbers raised more than $1.37 million (and counting) to reverse the decline of wildlife in Canada and around the world. Almost 500 volunteers also joined the effort.

This year’s climb marked a first for David Miller, former Toronto mayor and current president and CEO of WWF-Canada, who climbed the Tower on Saturday, April 8 in 24 minutes, 48 seconds.

David Miller, WWF-Canada president and CEO, says:
“Joining thousands of Canadians climbing 1,776 steps to the top of the Tower is an incredible experience. I can’t overstate the energy, the enthusiasm and the unity of purpose as we all joined together, right here in Toronto, to raise money to stop the degradation of nature. Some people climb for turtles, some for polar bears, some for their favourite whale. But whatever wildlife climbers connect with, the spirit of volunteerism soared this weekend. It’s no surprise this is our best climb ever.”

Shaun Stephens-Whale, WWF-Canada’s fastest climber, says:
“The Tower is intimidating. I started conservatively, got into the zone and before I knew it I was at the 60th floor. Breaking 10 minutes was my goal, so I’m happy to have achieved that – and to get the record. I’ll have to come back and see how fast I can go.”

About World Wildlife Fund Canada
WWF-Canada creates solutions to the environmental challenges that matter most for Canadians. We work in places that are unique and ecologically important, so that nature, wildlife and people thrive together. Because we are all wildlife. For more information, visit wwf.ca 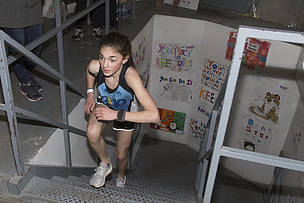 Aysia Maurice, 12, of Bolton, Ontario, at the finish line of WWF-Canada’s CN Tower Climb for Nature on Sunday April 9, 2017. Her time of 12 minutes and 53.4 seconds was the fastest of any female in yesterday's climb.
© James Carpenter/ WWF-Canada Enlarge
Like this article?