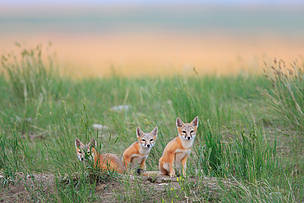 Swift Foxes on the wild grasslands southern Saskatchewan
© John E. Marriott via AllCanadaPhotos.com
TORONTO, Sept. 14, 2017 - Canada’s wildlife are in trouble, and those species that are declining are suffering deep losses, new research from WWF-Canada shows.

The Living Planet Report Canada, published today, is the most comprehensive synthesis of Canadian wildlife population trends ever conducted. It shows that on average from 1970 to 2014, half of monitored vertebrate wildlife species in the study suffered population declines. Of those, average decline is 83 per cent since 1970.
The picture is also worrisome for Canada’s federally protected species. Since 2002, when the Species at Risk Act became law, federally listed at-risk wildlife populations declined by 28 per cent, the report shows. Even with protections, the rate of decline for protected at-risk wildlife appears to be increasing to 2.7 per cent per year, compared with 1.7 per cent per year in the period 1970 to 2002.

What’s included in Canada’s Living Planet Index?
Key findings
Regional findings
What’s contributing to the decline?
Habitat loss and fragmentation, climate change, pollution, unsustainable harvest and invasive species are the key contributors to wildlife decline. Together, effects of these stressors are cumulative (simultaneous and additive) and cascading (changes in one species triggers changes in another).

Recommendations
The summit
In early 2018, WWF-Canada will convene a National Summit to Reverse the Decline of Wildlife to bring together community groups, academics and researchers, governments, Indigenous organizations, industry leaders, financial organizations, the arts community, international guests and others to combat wildlife loss in Canada.

David Miller, WWF-Canada president and CEO, says:
“The closer we looked, the more we realized wildlife loss isn’t some other country’s problem. It’s a Canadian problem. It’s a problem we can all work to solve together. Stopping wildlife loss in Canada will take commitment from individuals, industry, communities and all levels of government. People do have the power to make a difference by becoming citizen scientists, restoring habitat, embracing a low-carbon lifestyle and supporting the decisions that government, industry and communities need to make. By taking action we can, collectively, ensure more wildlife don’t land on the at-risk list in the first place.”

James Snider, WWF-Canada vice-president of science, research and innovation, WWF-Canada, says:
“As human interactions transform the natural world, biological diversity is undergoing significant declines. Tackling wildlife conservation in the face of increasing development pressures and climate change requires comprehensive data. We can’t measure the impact of stressors, and the success of protection efforts, if we don’t know what’s happening with wildlife populations now. We need a systematically designed monitoring system and the means to respond effectively to the findings. The framework can be created collectively by communities, research institutions, environmental groups and governments, and then populated with data collected by citizen scientists, community groups and researchers from coast to coast to coast. We also need to be willing to embrace new technologies like environmental DNA that make it so much easier for more Canadians to get involved in collecting data.

“All of this is even more important considering the increasing and accelerating impacts of climate change. When you consider that the two ecosystems in Canada that are the least well-studied – freshwater and Arctic – are also the two areas climate change is expected to alter the most dramatically, the need becomes even more urgent.”