The Return of Grand Banks Cod? 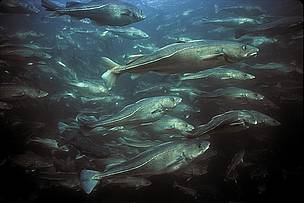 Atlantic cod (Gadus morhua) aquaculture, Newfoundland, Canada
© Gilbert Van Ryckevorsel / WWF-Canada
(Halifax, Canada: September 16, 2010) New fisheries data suggest that after a 16 year moratorium, Atlantic cod on the southern Grand Banks have increased by 69 percent since the last assessment in 2007. While this cod stock is still near historic lows, a significant increase in the number of spawning fish is good news for the future of this once major fishery. However, this trend towards recovery will only continue if the Northwest Atlantic Fisheries Organization (NAFO) commits to implementing an effective rebuilding strategy at their annual meeting next week.

NAFO, an intergovernmental fisheries science and management body whose mandate is to conserve Northwest Atlantic fisheries management through measures such as catch limits, is holding its annual meeting in Halifax, Nova Scotia, Canada September 20–24, 2010.

Although NAFO adopted a rebuilding strategy for Grand Banks cod in 2007 that included a voluntary 420 tonne bycatch reduction target, this strategy has been largely ineffective. In 2008, the bycatch reduction target for southern Grand Banks cod was exceeded by 119 percent and by 162 percent in 2009. Despite the failures, no new measures were implemented by NAFO at the 2009 Annual Meeting. Scientific projections from the latest stock assessments clearly demonstrate that continued failure to control excessive bycatch will prevent cod recovery in the foreseeable future.

"These new signs of recovery present a real opportunity," said Dr. Robert Rangeley, Vice President of WWF-Canada, Atlantic Region. "Management tools that include targets, limit reference points and harvest control rules to rebuild stocks are already being used with success in national waters. NAFO needs to act on the commitments they have already made by using these same types of tools to protect strong year classes and allow further stock growth."

Consumer demand for sustainably sourced seafood is growing. An increasing number of retailers have pledged to source only sustainable seafood, and many are dropping depleted stocks from their seafood supply in favour of those that meet criteria for well managed fisheries. NAFO must ensure that the precautionary approach is applied to all fish stocks in the Regulatory Area, and that priority habitats are protected, so that its fisheries can meet emerging seafood standards and remain globally competitive.

In addition to cod rebuilding measures, WWF will also be calling on NAFO to strengthen its commitment to protect vulnerable marine ecosystems (VMEs). In recent years, NAFO has taken several important steps toward the protection of vulnerable habitats, and last year temporarily closed 11 additional areas to bottom fishing activities. However, current closures, such as Orphan Knoll and a number of seamounts, will expire in December. At next week’s annual meeting, NAFO should designate the Orphan Knoll and the seamounts as VMEs, and close fisheries in these and other vulnerable areas at least until impact assessments have been completed and management measures are in place to prevent significant adverse impacts.

"All of the scientific data and seafood market trends are pointing to one conclusive message", said Dr. Bettina Saier, Oceans Director, WWF-Canada. "NAFO must act now to secure the fragile recovery of Grand Banks cod and other fish populations, and to protect vulnerable habitats. This will yield considerable long term ecological and economic benefits."