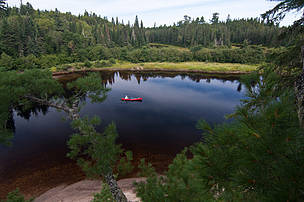 This statement is in reaction to concerns expressed by Resolute regarding FSC’s implementation of improved conservation measures, which are supported by all chambers of FSC’s membership, including the numerous companies that are part of the economic chamber.

It also is in reaction to the company’s announcement that it will not pursue new FSC certification. The announcement and concerns were in a statement released by Resolute on November 25, 2015.

“WWF strongly urges Resolute to engage constructively with FSC and its stakeholders to address some of the pressing challenges facing forest management in Canada.

The recent reinstatement of Resolute’s FSC certificate for 2.4 million hectares in Northwestern Ontario is a positive step that can help build the foundation for solutions-oriented discussions with FSC and others.

But more is needed. We call on Resolute to join Canada’s leading companies in advancing responsible forestry through participating in FSC’s open and collaborative process to address its concerns.

As a member of FSC, Resolute is duty-bound to promote FSC’s purpose, activities and reputation, as well as to actively engage in FSC’s processes, particularly in the development of a revised standard for FSC certification in Canada.

A greater commitment to FSC in Canada is critical to conserving the country’s natural wealth. Canada has the largest intact boreal forests in the world, but according to a recent Global Forest Watch study, leads the world in forest degradation. We will not be able to address climate change worldwide if we do not protect the world’s most important forests, including those in Canada.  Healthy forests play a critical role in absorbing carbon. Large amounts of harmful greenhouse gas emissions are released when forests are destroyed. The land sector, which includes forests, is responsible for nearly a quarter of all human-caused greenhouse gas emissions. Almost half of that derives from deforestation and forest degradation—the largest sources of CO2 emissions after the combined emissions from all cars, trucks, trains, planes and ships in the world.

We hope that Resolute will demonstrate leadership in the forest sector and commitment to long-term sustainability by working with FSC and other stakeholders to find solutions to issues raised by Resolute, and to ensure that progress can continue in conserving Canada’s great boreal forests.”

Resolute Forest Products joined the WWF Climate Savers programme in November 2011 and committed to increasing FSC certification of management forests from 18% to 80% by 2015, and reducing absolute scope 1 & 2 GHG emissions by 65% below its 2000 levels by 2015. WWF acknowledges Resolute’s achievement of having reached its GHG emissions reductions goal in 2013, two years ahead of schedule. Resolute was not able to meet its FSC commitment. The WWF Climate Savers agreement with Resolute will conclude on 31 December, 2015.

A canoeist paddling the Coulonge River in the boreal forest near Réserve faunique, La Vérendrye, Quebec, Canada
© Tim Irvin Enlarge
Like this article?