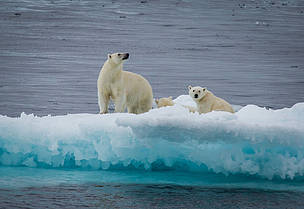 Polar bear and yearlings on an ice floe in Nunavut, Canada.
© Lee Narraway / Students on Ice
IQALUIT — Newly released survey results show two of Canada’s 13 polar bear subpopulations, previously thought to be declining, are likely stable and one could even be increasing. But the decline of Arctic sea ice is still a major threat to the species’ long-term survival, the survey report says.


What the report finds

“Though it is encouraging to see these polar bear populations are stable, climate change will continue to have a significant impact on the quality and availability of their habitat. Sea ice is vital for polar bears. This survey, coupled with anticipated continuing sea-ice declines, underscores the importance of protecting the Last Ice Area – where summer sea ice is expected to last the longest – for the long-term health of this species.”

“This work has helped to establish a reliable estimate for these polar bear subpopulations, a key component for the creation of a comprehensive conservation plan and a baseline from which to measure their health in the future. The decreases in reproduction and body condition of polar bears in Baffin Bay are very concerning. As sea ice continues to decline, frequent and timely monitoring of polar bear subpopulations across Canada will be necessary to ensure co-management boards can make informed decisions.”

WWF-Canada creates solutions to the environmental challenges that matter most for Canadians. We work in places that are unique and ecologically important, so that nature, wildlife and people thrive together. Because we are all wildlife. For more information, visit wwf.ca.