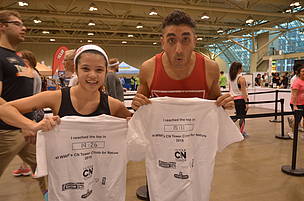 Climbers at WWF's 2016 CN Tower Climb show off their climb times.
© WWF-Canada
TORONTO, March 23, 2017 — WWF-Canada invites speedy athletes to compete in Toronto’s tallest challenge to become the fastest to scale all 1,776 steps in the inaugural Elite Climb Challenge as part of the annual CN Tower Climb For Nature community fundraiser.

About the Elite Climb Challenge
Meet some Elite Climb contenders
About the record time
The current record was set in 1989 by Brendan Keenoy, a police detective who reached the top in 7 minutes and 52 seconds. The fastest WWF-Canada climb recorded is around 10 minutes.

About WWF’s CN Tower Climb for Nature
WWF-Canada’s most significant fundraising event, the CN Tower Climb for Nature raises more than $1 million to protect habitats and species across Canada. About World Wildlife Fund Canada
WWF-Canada creates solutions to the environmental challenges that matter most for Canadians. We work in places that are unique and ecologically important, so that nature, wildlife and people thrive together. Because we are all wildlife. For more information, visit wwf.ca.

Climbers at WWF's 2016 CN Tower Climb show off their climb times.
© WWF-Canada Enlarge
Like this article?