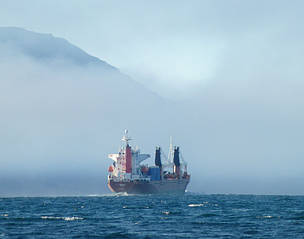 The research uncovered major issues with the state and availability of oil-spill response equipment, limited training resources and unreliable communications infrastructure, which, combined with a rise in shipping in the Arctic and extreme weather events, leaves Arctic communities increasingly vulnerable.

Community members are often the first responders to any spill, and need access to effective and reliable equipment to contain and clean up oil. Heavy fuel oil (HFO) is the standard marine fuel for cargo ships, tankers and large cruise ships. It is also one of the world’s dirtiest, most polluting ship fuels, and the most difficult to clean up.

Though the chances of a large-scale oil spill in the Arctic are currently small, the consequences would be significant. As sea ice melts and ship traffic increases, there is an opportunity now, while traffic is still relatively low, to put measures in place to respond to spills, or prevent them from happening in the first place. Because sparsely populated Arctic communities assume the risk of spills, they need both adequate equipment and response plans specifically tailored to the extreme Arctic environment.

Recommendations from the reports include:
David Miller, WWF-Canada president and CEO, says:
“Arctic wildlife, including polar bears, walrus, sea birds, as well as belugas, narwhals and bowhead whales, would be severely harmed in the event of an oil spill. The aftermath would also be felt in Arctic communities that depend on healthy waters for their food. Shipping will be part of the economic development crucial to creating robust, healthy northern communities, but we must ensure these opportunities also benefit nature. Now is the time to put measures in place that will help protect coastal communities and Arctic wildlife.”

Andrew Dumbrille, WWF-Canada senior specialist, sustainable shipping, says:
“Shipping in the Canadian Arctic is only going to increase. We’ve already seen a large cruise ship traverse the Northwest Passage, and new proposals for increased shipping for major mining projects are emerging due to longer open-water periods. The gaps identified in these reports are extremely concerning. It is not right that these communities should bear the heavy consequences of a ship-based oil spill, and not be given the tools and training necessary to limit the damage. We need to make serious changes to oil-spill response plans in the Arctic before our luck runs out.”