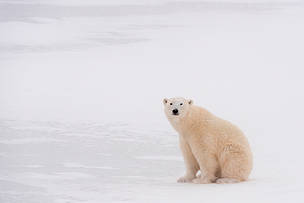 Polar bear on ice in Churchill, MB
© Elisabeth Kruger
IQALUIT, Jan. 29, 2018 – WWF’s first Polar Bear Scorecard found that Canada has shown leadership by investing in subpopulation monitoring, but two years into the 10-year, five-nation Circumpolar Action Plan for the Conservation of Polar Bears (CAP) it has not met its goals in identifying critical habitat nor in setting out best practices for tourism operators and for oil spill response.
Polar bears, which depend on sea ice for habitat, were reassessed as “vulnerable” by the International Union for the Conservation of Nature in 2015. Scientists at the time predicted one-third of the world’s polar bears would be lost by 2050 without urgent action to address climate change. That same year, the five states with polar bear populations – Canada, the United States, Russia, Norway and Denmark/Greenland – renewed their commitment to work together on a 10-year plan to manage all aspects of polar-bear conservation, including protecting critical habitat and raising the alarm on climate change. The WWF Scorecard rates the countries’ success in living up to their first two years of commitments under CAP.
As Canada is home to two-thirds of the world’s remaining polar bears (approximately 22,000 - 30,000 polar bears), it carries a significant responsibility for their long-term survival.
WHERE CANADA HAS SHOWN LEADERSHIP
WHERE CANADA CAN DO MORE
Megan Leslie, president and CEO of WWF-Canada, says:
“As a nation, we’ve spent the past few years doing the necessary groundwork, but now it’s time for Canada to step up and tackle some of the more complex and expensive problems.
“Canada should be leading actions both on the ground and internationally. For too long, we have under-resourced species and habitat protections, and the polar bear is no different. Despite being listed as of Special Concern under Canada’s Species at Risk Act since 2011, polar bears still don’t have a management plan. To ensure the longevity of the species, delays are no longer acceptable. The longer we wait to act, the harder it will be to prevent further declines.
“Finally, failing to act aggressively on climate change is tantamount to giving up on polar bears. All people and countries have a role to play in protecting the species.”
Paul Crowley, vice-president of Arctic conservation for WWF-Canada, says:
“While the Canadian government has made impressive progress in polar-bear science and policy, there is only so much that can be done on such a limited budget. As sea-ice continues to decline, frequent and timely monitoring of polar-bear subpopulations across Canada will be necessary to ensure co-management boards can make informed decisions. And right now, Arctic researchers can’t keep up.
“Another side effect of sea-ice melt is an increase in Arctic tourism and shipping and consequently an increasing risk of ship-based oil spills. Arctic communities are not prepared to deal with such a spill, and when it happens the contaminants will have long-term impacts on important habitat for wildlife, including polar bears, whales and fish.”
About World Wildlife Fund Canada
WWF-Canada creates solutions to the environmental challenges that matter most for Canadians. We work in places that are unique and ecologically important, so that nature, wildlife and people thrive together. Because we are all wildlife. For more information, visit wwf.ca.
For further information
Rebecca Spring, communications specialist
rspring@wwfcanada.org, +1 647-338-6274