Canada’s ban on oil and gas in marine protected areas an important win for wildlife: WWF-Canada 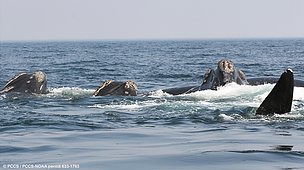 In June 2017, the federal government proposed regulations that would allow oil and gas development in 80 per cent of the Laurentian Channel MPA, which is used by Endangered North Atlantic right whales and porbeagle sharks, Threatened Northern wolfish and black dogfish. In response, WWF-Canada launched a public campaign urging Canadians to demand stronger protections for the over 11,600 sq. km site. Wildlife lovers responded, sending thousands of emails to the government asking to exclude these activities within the boundaries.

Last summer, Canadians mobilized again, this time to tell the government that oil and gas doesn’t mix with conservation and should not be permitted in any marine protected area. These new measures clearly indicate the government listened.

Canada has a goal of protecting 10 per cent of its ocean and coastal territories by 2020, and today’s announcement brings it to 8.27 per cent. WWF-Canada believes the quality of the protection is just as, if not more important, than the quantity.

“We’re celebrating the good news with Canadians across the country who helped us urge the government to keep oil and gas out of marine protected areas. Over the last couple of years, concerned citizens sent thousands of emails to the office of Prime Minister Justin Trudeau, which is now resulting in stronger protections for Canada’s wildlife. This is proof that when we speak up for wildlife, we can make a difference. This important first step in protecting critical habitats will give marine species safe havens that are free of seismic blasting and drilling.”

“We are delighted by the government’s move to protect our most fragile marine ecosystems, due largely in part to the combined efforts of thousands of Canadians across the country who voiced their concerns. Banning oil and gas activities in sensitive marine areas such as the Laurentian Channel is the right thing to do for our oceans — but our work isn’t over yet. Now that we have strong protections for federal MPAs, we remain committed to fighting for increased measures for all provincially protected sites and marine refuges created under the Fisheries Act. As climate change continues to alter our oceans, it will be critically important that Canada applies minimum standards for all protected ocean areas.”

Why we need MPAs with high standards

What protected areas remain exposed to oil and gas

The risk of oil and gas development to marine ecosystems

WWF-Canada creates solutions to the environmental challenges that matter most for Canadians. We work in places that are unique and ecologically important, so that nature, wildlife and people thrive together. Because we are all wildlife. For more information, visit wwf.ca.