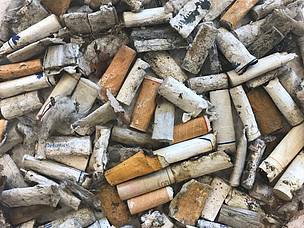 The Great Canadian Shoreline Cleanup 2018 annual report has revealed the top 12 Dirty Dozen items found on shorelines around Canada. Findings show that cigarette butts top the list as the most-common form of litter on our shores.

In fact, this was the highest number of cigarette butts ever collected through the Canadian Shoreline Cleanup. These numbers are partially due to the participation of The Butt Blitz, an organization dedicated to removing cigarette butt litter.

Cigarette butts have been identified as a top offender in shoreline pollution for many years. In August 2018, researchers from the University of British Columbia published a peer-reviewed paper analyzing the Great Canadian Shoreline Cleanup citizen science data for British Columbia. Researchers found that in urban areas such as Vancouver and Victoria, cigarettes accounted for nearly 50 per cent of the litter collected between 2013 and 2016. Other top polluters in the Dirty Dozen report included tiny plastic or foam pieces, food wrappers and bottle caps.

“These numbers confirm the devastating impact of plastic pollution on shorelines. Whether in the form of cigarette butts or bottle caps, the growing rate of plastic in our waters is alarming,” says Kate Le Souef, National Program Manager at the Great Canadian Shoreline Cleanup. “Cigarette butts break down into microplastics, which can have harmful effects on marine life. We hope to continue raising awareness on the growing pollution crisis and inspire positive action to protect the health of our waters.”

A conservation partnership of Ocean Wise® and World Wildlife Fund Canada, the Great Canadian Shoreline Cleanup is one of the largest direct-action conservation programs in the country. Year after year, volunteers play a critical role in helping reduce plastic pollution in coastal and freshwater bodies. 2018 marked the 25th year of the Great Canadian Shoreline Cleanup, and since the program started more than 850,000 volunteers have participated in cleaning up Canadian shorelines. This resulted in nearly 1.8 million kilograms of litter (the equivalent weight of 326 killer whales) from entering our freshwater and marine ecosystems.  Nearly 40,000 kilometres of the country were cleaned — the same distance travelled if you circled every Great Lake and its islands more than twice.

“It’s an inspiring effort by hundreds of thousands of Canadians,” said Lasse Gustavsson, CEO and president of Ocean Wise. “Not only does cleaning shorelines help restore critical habitat, but it reminds us to be thoughtful about what we use and how we dispose of it.”

“Our Shoreline Cleanup volunteers are truly awesome in the effort they make and the time they give to keep plastic and other types of litter out of nature,” said Megan Leslie, President and CEO of WWF-Canada. “We encourage all Canadians to join our campaign this year and protect wildlife habitat from plastic waste contamination. We need to give nature a helping hand.”

Ocean Wise®
Ocean Wise is a not-for-profit organization whose vision is a world in which oceans are healthy and flourishing. www.ocean.org

World Wildlife Fund Canada
WWF-Canada creates solutions to the environmental challenges that matter most for Canadians. We work in places that are unique and ecologically important, so that nature, wildlife and people thrive together. Because we are all wildlife. For more information, visit wwf.ca.