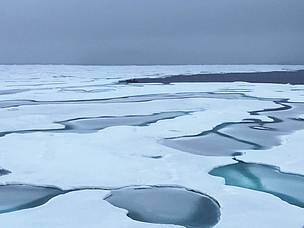 Eastern Arctic
© Josh Ostroff / WWF-Canada
The people and wildlife of Canada’s Arctic, high mountains and coasts are under increasing threat, but we can still make a difference with bold emissions cuts and nature-based solutions

OTTAWA, Sept. 25, 2019 – Today’s release of the IPCC Special Report on The Ocean and Cryosphere in a Changing Climate (SROCC) is yet another dire warning from the world’s scientists that the climate crisis is reaching a tipping point. Our planet’s ice and snow are melting, and the seas are rising.

Arriving amid a week of historic climate strikes and a UN Climate Action Summit in New York, the new report amps up the urgency for action with its comprehensive and staggering look at threats. There is simply no time left to delay climate action. Our future depends on what we do now.

Arctic: Polar regions are the front lines of the climate crisis — while the rest of the world is failing to meet targets intended to limit temperature rise to 1.5°C above pre-industrial levels, the Arctic is already at 2°C. In fact, over the last three winters, central Arctic temperatures have been 6°C above average.

We haven’t lost this much sea ice in at least the past 1000 years, and since the early 1980s, thick multi-year ice has declined by 90 per cent. The report warns summer sea ice will be lost completely in a two-degree world — we’re currently on track to hit 3°C — threatening the people and wildlife in Canada’s Arctic. It also warns that within 30 years, melting permafrost will threaten 70 per cent of infrastructure in Arctic communities while releasing previously trapped greenhouse gases into the atmosphere.

We can still save some of our cryosphere (our ice- and snow-covered land and waters), but we must act now.

The Ocean: The report makes clear that the melting of polar glaciers and ice sheets is now the largest contributor to global sea level rise, which is increasing 2.5 times faster than it was in the last century. No part of the world will be spared from the impacts of climate change as oceans warm and ice sheets and glaciers melt, causing rapid sea-level rise that could affect one billion people by 2050. Meanwhile 20–90 per cent of coastal wetlands will be lost, annual flood damage will increase by two to three times, and extreme storms will ramp up if we don't meet our targets.

Let’s be clear: nothing in human history comes close to the kinds and rates of change we expect to face from this climate crisis. But we can still minimize risk and maximize resiliency if we act now to decarbonize our economy and employ nature-based solutions.

High Mountains: Retreating glaciers, reduced snow cover and melting permafrost are contributing to sea-level rise while threatening species with extinction and harming the river systems we rely on for hydropower, agriculture and drinking water. Further changes are unavoidable, but we can limit the scale of these changes by increasing our mitigation and adaptation efforts in the mountains and downstream.


Paul Okalik, lead Arctic specialist and former Nunavut premier:
“The disappearance of sea ice threatens the very existence of ice-dependent wildlife and Inuit communities that rely on them for food, livelihood and cultural survival.”

Sigrid Kuehnemund, VP Ocean Conservation:
“The Ocean is our planet’s life-support system and this report makes crystal clear that our lack of action on climate change poses an existential threat to the health of the ocean — and that, in turn, threatens us all.”

Megan Leslie, president and CEO:
“Nature can help us mitigate and adapt to climate change — like protecting the Last Ice Area for High Arctic species and restoring coastal ecosystems to reduce flooding and store carbon — but only people can take the bold and immediate actions needed to save our planet.”

About the IPCC Special Report on Oceans and Cryosphere in a Changing Climate
Produced by the Intergovernmental Panel on Climate Change, the UN body responsible for assessing the science related to climate change, this and other IPCC reports are the authoritative source of information on climate change and underpin the international community’s understanding of climate change and related issues. The report adds to knowledge on how climate change is affecting ocean, coastal, polar and mountain ecosystems, and examines how nature and society must respond to the risks this poses to achieve climate-resilient development. This report, as well as other recent IPCC reports, injects urgency into the process of countries increasing ambition in their national climate plans.