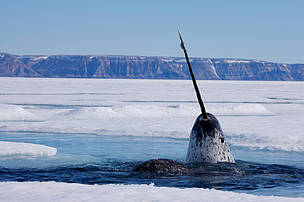 A narwhal (Monodon monoceros) surfacing for breath in the Arctic, Canada.
© © Paul Nicklen / National Geographic Stock / WWF-Canada
Sixty-five per cent of people in the territories and 58 per cent in the provinces want current ban extended to 2026. More than half of Canadians support a permanent ban. What will our next government do?

While candidates across the country debate Canada’s fossil-fuel future and the climate crisis, a solid majority of Canadians have already made up their minds when it comes to oil and gas development in Canada’s North.

According to an Environics Research poll released today by WWF-Canada, fifty-eight per cent of people in the provinces and sixty-five per cent in the territories want the current federal government ban on new oil and gas licenses in Canada’s Arctic extended by another five years to 2026.

When it comes to a permanent ban on offshore drilling, just over half of Canadians support that policy compared to around 40 per cent who are opposed.

The survey also revealed more than six in 10 Canadians say Canada should not permit drilling for Arctic oil because of environmental concerns such as spills and carbon emissions. This is twice the number of Canadians who say drilling should be allowed for its economic benefits. This matters right now because we’re approaching Election Day. Canada’s next government must decide whether to renew or lift the federal Arctic oil moratorium on new licenses, which expires in 2021. The Nunavut Impact Review Board has already recommended extending the ban in Baffin Bay and Davis Strait for “at least a decade” due to knowledge gaps of the local environment and an overall lack of regulatory, industry and infrastructure readiness in Nunavut.

The previous NWT government supported lifting the Arctic oil moratorium and various federal politicians and industry leaders have promoted the Arctic’s potential for oil and gas development. But public opinion is unequivocal.

These poll results support WWF-Canada’s position that Arctic drilling is not safe for the sensitive marine environment and simply cannot be reconciled with our climate targets. We must put wildlife and people first.

Mark Brooks, Arctic Oil & Gas Senior Specialist, says:
“As we saw during the massive Sept. 27 climate strikes, Canadians are extremely concerned about climate change and the environment. Our next government must listen to the majorities in both the north and south who want the Arctic drilling moratorium extended or made permanent.”

Megan Leslie, president and CEO, says:
“What does each party plan to do should they form government — start drilling for Arctic oil, extend the moratorium, or pass a permanent ban? Will the wishes of Canadians be respected or ignored? These are the questions that candidates and leaders must be asked. The rest of us have already answered.”

A full copy of the Environics survey can be found here.

About the Poll:
The findings are based on a two-part survey conducted with a sample of 1,011 telephone interviews in the provinces between May 13–19, 2019 and 1,000 in the territories (as well as small samples in Nunavik, Northern Quebec and Nunatsiavut, Labrador) between June 7 and July 8, 2019. Quotas were set by region, age, gender (in the provinces) and by Indigenous identity within region (in the territories) to ensure the final sample is representative of the respective populations, according to the most recent Census data. The margin of sampling error for a sample of 1,000 is plus or minus 3.1 percentage points, at the 95 per cent confidence level.

About World Wildlife Fund Canada:
WWF-Canada creates solutions to the environmental challenges that matter most for Canadians. We work in places that are unique and ecologically important, so that nature, wildlife and people thrive together. Because we are all wildlife. For more information, visit wwf.ca.