Ships dumped 35 million tonnes of contaminated water off BC coast in 2017: Study | WWF-Canada

Ships dumped 35 million tonnes of contaminated water off BC coast in 2017: Study 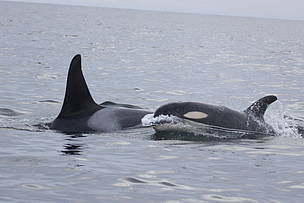 Two northern resident Killer whales (Orcinus orca) surfacing in the waters off the central cost of British Columbia, Canada
© Natalie Bowes / WWF-Canada
Washwater from “scrubbers” contains carcinogens and heavy metals that can harm killer whales and their habitat
VANCOUVER/OTTAWA, December 11, 2019
Turning air pollution into marine pollution, 30 scrubber-equipped ships dumped nearly 35 million tonnes of washwater effluent off the BC coast in 2017, according to a new study commissioned by WWF-Canada. Scrubbers are used to remove harmful sulphur oxides from exhaust gases of heavy fuel oil (HFO) used in marine engines. Washwater (or the mix of water and contaminants from HFO) is what’s disposed of in the ocean.
These harmful discharges put killer whales and other species at risk. Cruise ships were responsible for 90 per cent of these discharges.
But “open-loop” scrubbers, which immediately dispose of washwater, were used by 50 per cent of ships in the study. This acidic washwater is tainted with carcinogens and heavy metals. The others used “hybrid” systems, which allow ship operators to control when discharge is released by storing it temporarily. (Federal laws do not prohibit ships from functioning in “open mode” in Canadian waters.)
The report states that these scrubber discharges could grow by 35 per cent in 2020 as more ships begin using scrubbers to comply with new International Maritime Organization sulphur rules. Cruise ships could account for two-thirds of this increase.
WWF-Canada supports eliminating the use of open-loop scrubbers and/or discharge from hybrid scrubbers in Canadian waters, especially in marine protected areas and critical habitats. Transitioning away from HFO to fuels that don’t require scrubbers will eliminate this threat and help set a course for zero-emission shipping by 2050.
Andrew Dumbrille, senior specialist of sustainable shipping with WWF-Canada, says:
“Canada has a responsibility to safeguard our oceans. Washwater discharges from open-loop scrubbers pollute habitat and negatively affect wildlife, and an HFO spill would be devastating to coastal communities.”
Hussein Alidina, lead specialist of oceans with WWF-Canada, says:
“Southern resident killer whales in BC are under an enormous amount of stress, and it is concerning that washwater effluents may be further degrading their critical habitat. Pollution and contamination from all sources, including shipping, need to be reduced for long-term recovery of this population to be possible.”
About HFOs and scrubbers in the shipping industry:
• Ninety per cent of HFO carried by ships in BC passes through killer whale habitat.
• HFO is a harmful fuel that’s difficult to clean up because it’s thick and persistent, sticking around for weeks or months and affecting birds, whales and coastal areas.
• Several coastal states and ports around the world have banned open-loop scrubber discharge, including California, China and, most recently, Malaysia. Singapore and Fujairah, in the UAE, will ban discharges starting in 2020.
About World Wildlife Fund Canada
WWF-Canada creates solutions to the environmental challenges that matter most for Canadians. We work in places that are unique and ecologically important, so that nature, wildlife and people thrive together. Because we are all wildlife. For more information, visit wwf.ca.
-30-
For more information contact:
Tina Knezevic, communications specialist
tknezevic@wwfcanada.org
416-873-8448