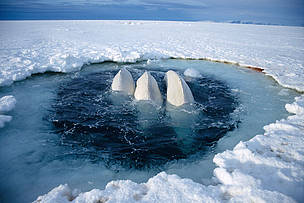 WWF-Canada also strongly supports the panel’s recommendation to create or amend legislation to allow for the implementation of Indigenous Protected Areas, an important tool for protecting biodiversity while supporting Indigenous self-determination, cultural preservation and economic development.

Full implementation of the recommendations by the federal government would mean a ban on activities such as oil and gas development, bottom trawling and seabed mining in of all of Canada’s federal marine protected areas. However, marine refuges – created more quickly through a different process – would, potentially, remain open to these activities. More than half of Canada’s protected marine space, or 4.8 per cent of 7.9 per cent, are refuges rather than marine protected areas. WWF-Canada wants to see harmful activities kept out of marine refuges, too.

The national panel’s report recommends:  What WWF-Canada would like to see:   Sigrid Kuehnemund, WWF-Canada vice-president of ocean conservation, said:
“World Wildlife Fund Canada is very pleased by the national panel’s strong recommendation that the government of Canada adopt international standards for marine protected areas. It’s up to the federal government now to pass these recommendations into law to ensure harmful activities such as oil and gas development, bottom trawling and seabed mining are kept out of areas set aside for conservation. Establishing stronger laws and regulations for protected areas is the best way to provide clarity for all ocean stakeholders and to ensure that Canada’s marine protection efforts are meaningful.

“WWF-Canada wants to see the recommendations for marine protected areas extend to marine refuges to ensure these measures provide real protections to habitats and species.

“We strongly support the creation and implementation of Indigenous Protected Areas and would also like the panel’s recommendations on greater transparency in ocean protection planning to be implemented.”

WWF-Canada’s role
WWF-Canada works on marine protection on all three coasts and has worked for decades to keep harmful activities, such as oil and gas development, out of marine protected areas. Recent campaigns saw thousands of Canadians email the Prime Minister to ask for a ban on oil and gas in protected areas, including MPAs and marine refuges.

Belugas in the Arctic
© Sue Flood / WWF-Canada Enlarge
Like this article?