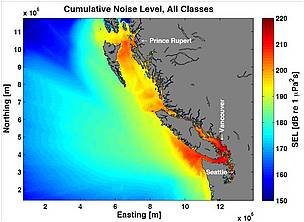 The map will help managers identify noise exposure levels in critical habitat for whales, dolphins, porpoises and other marine life that depend on sound for their survival.  According to WWF-Canada, who sponsored the study, the map reveals a disturbing pattern.

“Underwater noise pollution from shipping traffic is now a persistent feature of B.C. coastal waters,” says study lead Dr. Christine Erbe, “and an increasing threat to marine mammals that depend on sound to hunt, navigate, find mates and avoid predators.”

Erbe says that while the study shows noise levels are high in the shipping routes leading into the ports of Vancouver, Seattle and Prince Rupert, many quiet ocean spaces still exist on B.C.’s coast – places that could potentially serve as wildlife refuges.

Co-author Dr Rob Williams says that when he started studying whales in the 1990s, ocean noise was treated as an ephemeral nuisance that comes and goes. “Countries now recognize noise as a chronic and persistent feature of the marine environment,” he says. “These new tools allow us to incorporate acoustic habitat quality into our recovery plans for threatened species.”

WWF’s Senior Marine Science Officer Hussein Alidina noted that Canada has not set guidelines for sound exposure levels from chronic sources of noise like shipping in its oceans. “If equivalent recommended European Union guidelines for chronic noise levels were to be applied in B.C, this study would show noise exposure levels exceed guidelines in many places, including critical habitat areas for southern resident orca whales.” he added.

The authors also noted that a substantial business opportunity exists for Canada to lead the way on ocean quieting technologies. According to Williams, “With Canada’s recent investments in military and merchant ship building in Vancouver and Halifax, our country is uniquely poised to build the quiet ships the world will want as noise becomes more actively managed in sensitive marine habitats in Europe and beyond.”

This study in B.C. waters provides a useful model that could be applied to other parts of the globe to protect the integrity of other quiet ocean spaces like Australia’s Great Barrier Reef and the Arctic from increased shipping noise.