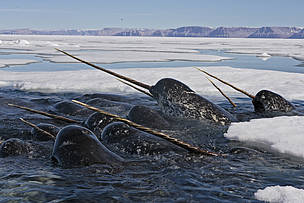 The permits were granted more than 40 years ago and recently disputed in a lawsuit by WWF-Canada. By renouncing these permits, the most significant threat to the species and people in the region is eliminated. The stage is now set for the Government of Canada to protect a region larger than currently planned, as advocated by Inuit groups and WWF-Canada.

Quote from David Miller, president and CEO of WWF-Canada
“This is an exceptionally important win for conservation. Our long-term efforts to create marine protected areas and expand protection for Lancaster Sound inevitably led to a focus on eliminating these offshore oil exploration permits and ending the risk of a spill. The end of these permits improves the quality of the proposed protected area and allows for the proposed boundaries to be expanded.

“At the same time, this announcement is so much bigger than Lancaster Sound. This shows that business, local communities, Indigenous peoples, environmental organizations and the government can work together to achieve significant results as we shift toward a low-carbon economy.”

Quote from Paul Crowley, vice-president of Arctic conservation, WWF-Canada
“Today’s announcement for Lancaster Sound is a credit to the local people and organizations who have been tirelessly defending the ecological integrity of the region for more than 40 years. It was these people and groups who identified the incredible biodiversity in Lancaster Sound and who spoke out against development that would compromise it.

“This Arctic region is far from the desolate place that southerners may imagine. Marine mammals, including narwhal, polar bear, beluga and bowhead whales, return each summer to feed in nutrient-rich waters. Now that there is nothing to stop the protection of this incredible region, we can move quickly to create the Lancaster Sound National Marine Conservation Area.”

About World Wildlife Fund Canada
WWF-Canada creates solutions to the environmental challenges that matter most for Canadians. We work in places that are unique and ecologically important, so that nature, wildlife and people thrive together. Because we are all wildlife. For more info visit wwf.ca