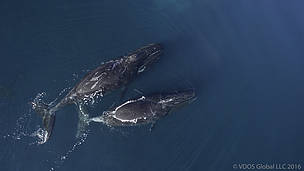 Rare footage of bowhead whales near Pangnirtung, Nunavut.
© LGL Limited, the University of British Columbia, VDOS Global, Fisheries and Oceans Canada and WWF-Canada
IQALUIT, NUNAVUT, Oct. 19 2016 – Rare drone footage of one of Canada’s largest marine mammals is now available, and will help both researchers and the public get a closer look at this magnificent Arctic species.

“It was amazing to see how the whales were completely undisturbed in the presence of the drone. You can watch them rolling, flipper slapping, tail breaching, socializing, all while being filmed by a drone at a safe distance,” says Brandon Laforest, senior specialist Arctic species and ecosystems, with WWF-Canada.

Every year, hundreds of bowhead whales – the longest-living mammals in the world with a lifespan of up to 200 years – spend the open-water summer months feeding on zooplankton in Cumberland Sound, before heading south to Hudson Strait for the winter. Despite their size, bowhead whales are rather elusive and until recently, scientists had to rely on lower-quality aerial observations made using small aircrafts at higher altitudes.

Through the use of drones, the team was able to capture rare high-quality images and videos of a small subset of the Eastern Canada-West Greenland population of bowhead whales. This footage will help researchers fill in knowledge gaps about the biology and feeding strategies of bowhead whales. It is believed to be the first intensive effort to study bowhead whales with the use of an aerial drone.

Why use a drone?
Aerial drones offer an unprecedented opportunity to study bowhead whales in a non-invasive way. This technology allows for a bird’s-eye view of the whales, which provides:
Who was involved?
Dr. Bill Koski, LGL senior environmental biologist, says:
“The details we can see in these drone photos, you cannot get that from airplanes. By getting down so close, and getting the resolution we can get with drones, it gives you a new perspective on the whales. The ability to observe whales for a longer period increases our knowledge of the whales at individual and population levels. As drone technology develops, the possibilities are huge. As battery length and range improves, unprecedented insights in whale behaviours will be possible.”

Brandon Laforest, WWF-Canada senior specialist, Arctic species Ecosystems, says:
“Drone studies represent a noninvasive and visually stunning way of furthering our understanding of the ecology of the species. By being able to identify individual whales, we can learn more about growth patterns and reproductive outputs, and monitor this population as climate change continues to alter the Arctic marine habitat.”

Sarah Fortune, PhD candidate at University of British Columbia, says:
“Much of what is known about large whale feeding behaviour has come from boat-based observations and archival tags that record an animal’s dive depth. However, these techniques provide a limited perspective of what the whale is actually doing underwater. We are excited to have the opportunity to combine aerial imagery using both the aerial drone and fine-scale tagging, to gain new insights into the feeding strategy of Eastern Canada-West Greenland bowhead whales.”

Brian Whiteside, VDOS Global LLC says:
“VDOS Global is invested in using technology to have a positive impact on the environment and people around the world.  We were truly excited to be a part of supporting WWF-Canada in such an important cause and are even happier to see the results and impact the data will have in supporting such critical research.”

Video and still images captured from the drone are available for public use and distribution here:


The sUAS data were collected under Special Flight Operation Certificate File Number 5812-11-682, ATS 16-17-00014027, and RDIMS 12044419 and were approved by the University of British Columbia Animal Care Committee (Animal Care Amendment A14-0064-A002). Bowhead whale behavioural data were also collected under the following permits: Department of Fisheries and Oceans License to Fish for Scientific Purposes S-16/17 1005-NU and Animal Use Protocol FWI-ACC-2016-09.