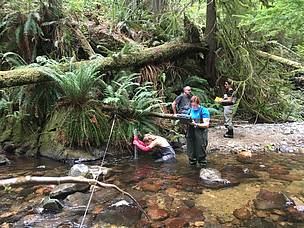 Monitoring water health indicators in the Pacific Coastal watershed
© Heather Leschied, Living Lakes Canada
VICTORIA, Sept. 12, 2018 – Despite significant signs of stress in some southern sub-watersheds, the Pacific Coastal basin – stretching from Vancouver Island to Yukon Territory – has been found to be currently in good health overall based on new monitoring results from 33,074 monitoring sites reporting on water quality, water flow, fish and benthic invertebrates.
The finding provides an important baseline for a region ravaged by wildfires, and already enduring stress from pollution, climate change and, in some sub-watersheds, habitat fragmentation.
Until now, an overall health score for the Pacific Coastal watershed couldn’t be tabulated for World Wildlife Fund Canada’s Watershed Reports due to a lack of data for water quality and benthic invertebrates (including flies, beetles, aquatic worms, snails and leeches). While nearly two-thirds of Canada’s watersheds are data-deficient for health indicators, the lack of data in this region was especially worrisome since southern sub-watersheds in B.C. experience a high level of stress.
Environment and Climate Change Canada (ECCC) published new water quality data last year, and WWF-Canada worked in partnership with both Living Lakes Canada and ECCC, with the support of Loblaw Company Ltd., to collect benthic samples that were then analyzed and assessed alongside previously collected data using WWF-Canada’s Watershed Reports methodology.
Elizabeth Hendriks, WWF-Canada’s vice-president of freshwater conservation, says:
“Given the growing stress of climate change, it’s essential for wildlife – like salmon and other fish that move between freshwater and ocean ecosystems – and for communities that depend on access to fresh water that we maintain the health of these rivers and streams. While overall this finding is good news for B.C., when we look at the level of stress in southern sub-watersheds, we know we can’t expect continued good health overall without a strong commitment to freshwater conservation. We’re on borrowed time now.”
Kat Hartwig, executive director of Living Lakes Canada, says:
“Thanks to a growing network of community-based monitoring groups across the country we are now beginning to build a robust baseline of data, which will allow us to better track how events like this summer’s wildfires are changing conditions in our watersheds. With data baselines and trends, we will be better positioned to make science-based decisions and take the appropriate and necessary actions to safeguard the freshwater ecosystems.”
About the Pacific Coastal basin:
Why community-based monitoring?
About World Wildlife Fund Canada
WWF-Canada creates solutions to the environmental challenges that matter most for Canadians. We work in places that are unique and ecologically important, so that nature, wildlife and people thrive together. Because we are all wildlife. For more information, visit wwf.ca.
For further information
Rebecca Spring, senior communications specialist, rspring@wwfcanada.org, +1 647-338-6274 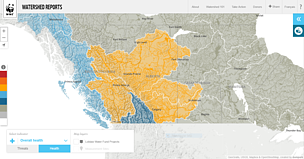 After new data on water quality and benthic invertebrates were reported and analyzed, WWF-Canada assessed the Pacific Coastal watershed and found it to be in good health overall
© WWF-Canada Enlarge 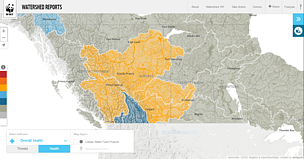 Prior to new data reporting and analysis, WWF-Canada was unable to tabulate an overall health score for the Pacific Coastal watershed.
© WWF-Canada Enlarge
Like this article?