60 per cent of wildlife worldwide has been lost | WWF-Canada

60 per cent of wildlife worldwide has been lost 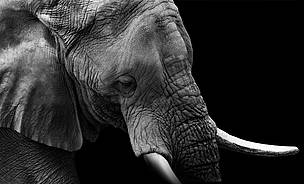 Elephant
© (c) Shutterstock/ Olga i / WWF
TORONTO, Oct. 29, 2018 – Global wildlife populations have declined by 60 per cent on average in just over 40 years, according to World Wildlife Fund’s new global Living Planet Report. The report, released today, presents a sobering picture of the harmful human impacts on wildlife, forests, oceans, rivers and climate. It underlines the rapidly closing window for action and the urgent need for widescale adoption of new approaches to valuing, protecting and restoring nature.
Canadian context
Canadian wildlife are not exempt from this global biodiversity crisis. WWF’s recent Living Planet Report Canada found that half of monitored vertebrate species in this country are declining, and of those, the decline is 83 per cent. This report also found that federally protected at-risk species have continued to decline since the Species at Risk Act became law.
Megan Leslie, WWF-Canada’s president and CEO, says:
“Our constantly increasing demands on nature are driving wildlife to extinction. It’s not just elephants, freshwater dolphins and rhinos, but Canadian wildlife too. Caribou, southern resident killer whales, burrowing owls: These Canadian species have been pushed to the brink by human impacts on nature.
“We are at a pivotal moment. We still have a chance to turn around our impact on nature and begin to reverse the decline on wildlife. Canada has committed to new land protections the size of Alberta by 2020. If we do this right, by choosing connected areas that have maximum value for wildlife, we could make meaningful progress on supporting biodiversity here at home. But if we squander this opportunity, we will condemn many more species to population loss and even extinction.”
The science
The Living Planet Report 2018 presents a comprehensive overview of the state of our natural world, 20 years after the flagship report was first published. Through indicators such as the Living Planet Index, provided by the Zoological Society of London, the Species Habitat Index, the IUCN Red List Index and the Biodiversity Intactness Index, as well as planetary boundaries and the ecological footprint, the report paints a disturbing picture: Human activity is pushing the planet’s natural systems that support life on Earth to the edge.
What is driving global species loss?
Habitat loss due to agriculture and overexploitation of species remain the biggest threats to biodiversity and ecosystems globally. These threats are particularly evident in the tropics, resulting in more significant wildlife loss in those areas. Only one-quarter of land on Earth is free from impacts of human activities and that number is projected to decline to just one- tenth by 2050.
Habitat loss is the greatest threat to Canadian wildlife as well from forestry, agriculture, urbanization and industrial development. Boreal forests and wetlands – both substantial carbon sinks – have experienced considerable disruption in Canada.
Climate change is a growing threat, already having an effect at an ecosystem and species level.
What can be done?
This Living Planet Report echoes the urgency heard from the recent International Panel on Climate Change’s report Global Warming of 1.5°C: We are in the midst of a planetary crisis caused by human activities and we are still trending in the wrong direction.
To date, the loss of 60 per cent of our wildlife worldwide has failed to galvanize governments, businesses and individuals. Like climate change, bending the curve on biodiversity loss requires immediate action.
Governments at all levels, business, industry and the public must immediately join forces to meet Canada’s baseline commitments on biodiversity, protected areas and climate change. Failure to do so will result in continuing wildlife losses, with many species heading towards extinction. Specifically, we must:
Two recent federal decisions have created increased protections for Canada’s wildlife:
Key findings from Living Planet Report
Key findings from Living Planet Report Canada
About World Wildlife Fund Canada
WWF-Canada creates solutions to the environmental challenges that matter most for Canadians. We work in places that are unique and ecologically important, so that nature, wildlife and people thrive together. Because we are all wildlife. For more information, visit wwf.ca.
For further information
Rebecca Spring, senior communications specialist, rspring@wwfcanada.org, +1 647-338-6274