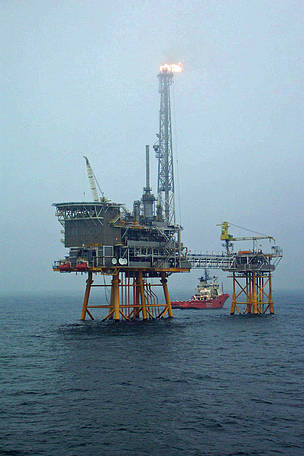 A ship sails near an oil and gas platform in the Hibernia oil field in the Atlantic Ocean off Newfoundland, Canada, circa 1990.
© Francis Wiese / WWF-Canada
ST. JOHN’S, NL, August 21, 2019 — A third oil spill in under a year occurred off the coast of Newfoundland and Labrador last weekend, the second from the Hibernia platform this summer. The platform had been shut down following last month’s 12,000 litre spill, but the Canada-Newfoundland and Labrador Offshore Petroleum Board (C-NLOPB) gave it permission to resume operations despite an ongoing investigation. The platform had been operating less than 48 hours before this latest incident occurred. Hibernia initially estimated 150 litres of oil but is now reporting that closer to 2,200 litres spilled due to a malfunction which caused drains to overflow.

While response efforts are underway, it is extremely difficult to clean up oil offshore or determine whether wildlife has been harmed. Oil spills, the most hazardous of all environmental risks associated with the offshore oil and gas industry, can be catastrophic for marine habitats and the whales, birds and fish that call them home. The Hibernia platform sits in the centre of one of the most diverse marine biological systems in the North Atlantic.

Sigrid Kuehnemund, WWF-Canada’s vice president of ocean conservation, says:
“The frequency of oil spills in Newfoundland and Labrador’s offshore is extremely concerning and highlights the need for more stringent regulation of the offshore oil and gas industry. Currently, industry self-reports on how much oil was spilled, how and why it was spilled and what impact it has had on wildlife. This is unacceptable. WWF-Canada is calling for independent observers on oil platforms, much like those on fishing vessels, to monitor impacts on wildlife and ensure industry’s adherence to protocols.”

WWF-Canada is calling for increased regulatory oversight of the offshore oil and gas industry, including improvements to financial and liability rules, risk assessment procedures, drilling and well control rules as well as improved spill response capacity, especially in light of Newfoundland and Labrador’s desire to significantly boost production by 2030.

Impact of oil on marine wildlife:
On birds:
- Oil coats seabirds’ feathers, depriving them of their waterproofing and insulating properties, leading to death from hypothermia.

On fish:
- The threshold for harm from exposure to oil is remarkably low in the early life stages, including for eggs, larvae and juvenile fish.
- Oil exposure in adult females contaminates their eggs resulting in heart defects and other abnormalities in larvae, which are detrimental to survival.
- Many fish species have planktonic larvae which live near the surface and can be exposed to oil, leading to deformities and death.

On marine mammals:
- Oil adheres to and damages marine mammals’ skin, eyes and breathing holes. Inhalation of oil’s volatile and toxic components causes respiratory system damage.
- Consumption of oil or oil-soaked prey causes gastrointestinal damage.
- Gastrointestinal and other damage can occur due to excessive grooming by a mammal trying to remove oil from its skin or coat.
- Eye, skin and mucus-membrane damage can also result from contact with oil.

A ship sails near an oil and gas platform in the Hibernia oil field in the Atlantic Ocean off Newfoundland, Canada, circa 1990.
© Francis Wiese / WWF-Canada Enlarge
Like this article?