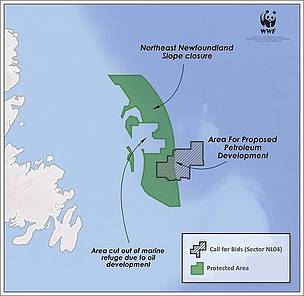 This map shows the overlap in the protected area (green) and the proposed nominated area (grey).
© Will Merritt / WWF-Canada
St. John’s, NL, September 6, 2019 - Last week, the Canada-Newfoundland and Labrador Offshore Petroleum Board (C-NLOPB) put out a Call for Nominations in the Northeast Newfoundland Slope Closure — a marine refuge counting towards Canada’s marine protection targets. This nomination process helps the C-NLOPB determine what sites can be open for new oil and gas developments, meaning that sites within this protected area could be up for grabs by oil companies in 2020.
While Canada adopted minimum standards for marine protected areas, including the prohibition of all oil and gas activities, these standards do not apply to marine refuges, which are protected under the Fisheries Act. WWF-Canada has repeatedly called for minimum standards for all sites considered “protected” in order to effectively protect marine biodiversity, including both marine protected areas and marine refuges.

The Government of Canada has said that if oil and gas leases are awarded within parts of their protected areas then they will stop counting them towards international protected area targets. Parts of the Northeast Newfoundland Slope Closure, a site which fish harvesters voluntarily agreed to stop fishing in to protect important fish habitat, has had oil and gas leases awarded within it since its creation in 2017. That means that while the area remains off limits to fishermen, it is open for oil and gas development.
This news comes at a time when three oil spills have occurred off Newfoundland and Labrador in under a year — two of them this summer alone. WWF-Canada has already called for increased regulatory oversight of the oil and gas industry, including improvements to financial and liability rules, risk assessment procedures, drilling and well-control rules as well as improved spill response capacity. It has also repeatedly asked that marine refuges be excluded from development by the oil and gas industry.
Sigrid Kuehnemund, WWF-Canada’s vice president of ocean conservation, says:
“Oil and gas exploration and exploitation is never compatible with ocean conservation, and the frequency of spills in the offshore environment proves that this type of activity poses real risk to the sensitive species that live there. We ask that the C-NLOPB remove all marine refuges from any future nomination processes in order to safeguard these important ocean habitats.”
About the Northeast Newfoundland Slope
• Created in December 2017, the marine refuge is about 46,800 square kilometres, an area roughly the size of Denmark.
• The refuge was created to protect slow-growing, fragile cold-water corals and sponges, which form important structures that provide essential habitat for young fish.
• Bottom-contact fisheries were banned in the refuge to protect the corals and sponges. The Fish, Food and Allied Workers Union made a statement condemning the new oil and gas nominations.
About World Wildlife Fund Canada
WWF-Canada creates solutions to the environmental challenges that matter most for Canadians. We work in places that are unique and ecologically important, so that nature, wildlife and people thrive together. Because we are all wildlife. For more information, visit wwf.ca.
-30-
For more information contact:
Tina Knezevic, communications specialist, tknezevic@wwfcanada.org

This map shows the overlap in the protected area (green) and the proposed nominated area (grey).
© Will Merritt / WWF-Canada Enlarge
Like this article?