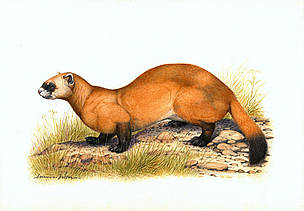 Mustela nigripes Black-footed ferret
© © WWF / Helmut Diller
Today’s release is testament to what is possible when we focus on solutions and we don't give up hope,” said Gerald Butts, President and CEO, WWF-Canada. “Whether the challenge is tackling climate change or saving endangered species, we can succeed when we act quickly to do what needs to be done.”

Once thought to be extinct globally, a small number of the ferrets were discovered on a remote ranch in Wyoming in 1981. Now more than 6,500 have been raised in captivity and released on sites across its former range in the west-central U.S. and northern Mexico. Some ferrets in today’s Canadian release were raised by the Toronto Zoo, and then trained to hunt wild prairie dogs in a ferret “boot camp” in Colorado.

“Cross-border co-operation is absolutely essential to the recovery of the ferret and many other endangered wildlife species,” said Steve Forrest, Manager of Restoration Science for the Northern Great Plains program, WWF-US, and an international representative on Canada’s ferret recovery team. “Nature doesn’t recognize the borders between the Canada, the U.S., and Mexico, so our conservation efforts must stretch across those boundaries if we are to successfully restore North America’s threatened grassland ecosystems.”

The Saskatchewan release is the first in Canada and now restores the ferret to all three countries of its former North American range. WWF experts in both Canada and the U.S. contributed advice and funding of more than $125,000 since 2003 to help its recovery.

“Reintroduction of a species once thought to be extinct, like these ferrets, give us hope that wildlife – and our planet - can be restored,” added Butts. “We salute Parks Canada and all the partners involved for their extraordinary efforts and for their recognition of WWF’s unique cross-border role in this conservation success story.”

“Extinction is final”, said Forrest. “Through sheer luck, we were given a second chance to save the black footed ferret. Working together, Canadian and U.S. governments and their partners have shown it can be done. WWF calls on the federal governments of both countries to ensure all endangered species have their critical habitat properly defined and quickly protected, before the finality of extinction ends the thread of species that make up the fabric of our natural world.”

Ferrets are members of the weasel family, along with species such as ermine, skunk and otter. With strong “face-mask” striping, black-footed ferrets are specially adapted to the North American prairies and are unique in nearly always preying upon black-tailed prairie dogs for food. Prairies dogs – not to be confused with ground squirrels or gophers – are only found in Canada in extreme southern Saskatchewan, principally in Grasslands National Park.

- 30 -
Note:
Steven Price, Sr. Director, Conservation Science and Practice for WWF-Canada is on-site at Grasslands National Park for the release and is available for comment