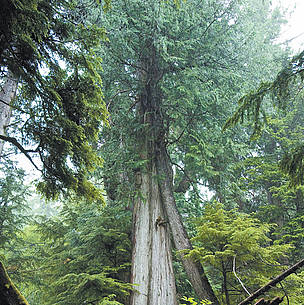 Ottawa, Ontario, May 19, 2011 – The Honourable Peter Kent, Canada’s Environment Minister and Minister responsible for Parks Canada today celebrated the 100th birthday of Parks Canada, which was recognized on the special occasion by global conservation organization WWF-International with their prestigious Gift to the Earth award. The award recognizes Parks Canada’s outstanding conservation achievements, including the recent dramatic growth of Canada’s system of national parks and national marine conservation areas.

“It’s an incredible honour for Parks Canada and all Canadians to be recognized for our tremendous efforts to build a conservation legacy,” said Minister Kent. “Our magnificent national treasures - our world-class family of national parks, marine conservation areas and historic sites - are one of Canada’s greatest gifts to the world.”

“In its first century, Parks Canada has done an outstanding job of creating and managing the nation’s parks, which are truly Gifts to the Earth,” said Gerald Butts, CEO and President of WWF Canada. “They have also exemplified a high standard of practice and performance for parks agencies everywhere. We look forward to a second century of progress toward completing the parks system.”

Throughout its centennial, Parks Canada will be highlighting 100 years of world leadership in conservation, education and visitor experience programs and is inviting Canadians to come celebrate by visiting Parks Canada places across the country.

“Parks Canada’s centennial is a reason for all Canadians to be proud,” said Minister Kent. “As the world’s first national service dedicated to protecting and presenting natural and historical treasures, Parks Canada has helped set the bar for other countries around the world to build a legacy that future generations can be proud of and will continue to benefit from.”

To mark the occasion, Minister Kent also announced that the historic Dixon family ranchlands of the Frenchman River Valley in Southwest Saskatchewan will be protected for future generations as part of Grasslands National Park of Canada. This significant area of spectacular scenery and native grasslands is part of one of the most endangered ecosystems in Canada, a global priority area for WWF, and the same national park where the plains bison and black-footed ferret were recently reintroduced.

The Parks Canada system has had tremendous growth momentum. Starting with the creation of the first national park in Banff in 1885, by 2006 Canada had set aside over 277,000 km2 of lands and waters in national parks and national marine conservation areas. In the past five years, the Harper Government has taken steps that will add more than 130,000 km2 to the lands and waters administered by Parks Canada - up to a 48 percent increase since 2006. Among this growth are the six-times expansion of Nahanni National Park Reserve in 2009 and the creation of Gwaii Haanas National Marine Conservation Area Reserve and Haida Heritage Site in 2010.

“All Canadians have made a contribution to this gift to the Earth, and so we should all share in the celebration,” said Parks Canada CEO Alan Latourelle. “As we enter Parks Canada’s second century of service, we will build on these successes and the leadership demonstrated by Parks Canada’s amazing staff, our dedicated network of volunteers, and the incredible support network we rely upon – our Aboriginal partners, the conservation organizations, local communities, youth groups and our university research partners, to name a few.”

Established in 1911 as the Dominion Parks Branch, Parks Canada was the world’s first national park and national historic site service and ever since has been a world leader in protecting and presenting treasured natural and historic places.

Parks Canada works to ensure that Canada’s natural and historic treasures are protected and presented for the enjoyment, education and benefit of all Canadians, today and in the future, offering them the opportunity for personal moments of inspiring discovery.
For additional information, please see the accompanying backgrounders at www.parkscanada.gc.ca under Media Room.
-30-

Information:
Press Secretary
Office of the Minister of the Environment
819-997-1441